However, this year, due to the pandemic, Amazon had pushed back their annual Prime Day from the usual mid-July to now October. Instead of it being a summer “Boxing Day,” this year, it will be a pre-game for Black Friday!

There’s no doubt Amazon is the most significant player in the online marketplace.

In our previous blogs, we’ve discussed how eCommerce has skyrocketed due to COVID-19, and we’re seeing even baby boomers engaging in more online shopping behavior.

When we say the term “online shopping,” your mind probably thinks of Amazon, proof that they are a giant. It’s hard to believe Amazon.com started as a simple little website that sold books!

Today, we’re taking a closer look at Amazon and its influence on the eCommerce industry.

Photo by Bryan Angelo on Unsplash

When researching a product, people search it up on Amazon directly before looking it up on Google.

This could be due to Amazon’s robust product pages with customer reviews and related recommended items.

90% of buyers agree that they are more likely to purchase Amazon products than other eCommerce sites.

Customer reviews are huge factors consumers take into consideration when looking for a product to purchase. They can compare and contrast different brands directly on Amazon, desktop, or mobile and read what real people have to say about the product. The reviews are honest and candid, even sometimes hilarious!

Other big-box retailers are following in Amazon’s footsteps in investing efforts into eCommerce. They are all growing but still have ways to go to get to Amazon’s level. For example:

Not only does Amazon have Google as a competitor when it comes to smart home devices (Amazon Echo VS Google Home), they compete on the eCommerce front too.

Amazon’s most significant competitor would be Google. Google created “Google Shopping” to compete with Amazon directly. Both are complete eCommerce marketplaces for selling products online in a user-friendly, direct way. What gives Google Shopping an edge is that retailers who have brick and mortar stores options to list their products and drive local foot traffic into stores. Big brands like Sephora, Ulta, etc. have started listing on Google Shopping.

On The Way To Become
the King of Delivery

For the entire year of 2019, Amazon shipped about 2.5 billion packages a year just in the United States. FedEx delivered 3 billion, and UPS delivered a whopping 4.7 million parcels.

As an eCommerce giant, Amazon manages a good portion of their deliveries and delegates the rest to UPS, FedEx, USPS, Canada Post, and other postal services.

Amazon has been rapidly expanding its delivery operations. Although they take on $40 billion a year on shipping costs, which impacts their gross profit, they understand that it is essential to their future growth and profitability.

In July of 2020, Amazon had shipped 415 million packages. The monthly average between April and June was 389 million, so there was quite a jump in volume. Experts expect to see an increase in the volume of online orders as businesses and demand have been making a comeback. The experts did add that it should be anticipated that deliveries would see some delays due to the sheer volume and COVID-19 precautions in place.

We definitely can expect to see Amazon taking a bigger bite of the package delivery game as they begin to automate their warehouse and operations.

Photo by Simon Bak on Unsplash

There are 150 million Amazon Prime members around the world!

The biggest perk of Amazon Prime is access to hundreds and thousands of items with free delivery, even free one-day deliveries.

Mentioned in the point above, Amazon has been doubling down on its in-house delivery efforts. A big reason is because of Amazon Prime. One-Day-delivery is how Amazon upped its game from other eCommerce retailers. Not “Fast Shipping” or “Ships within 3 to 5 business days”. One-day delivery is included for a vast majority of products on Amazon, which is exclusive for Prime Members.

Amazon’s CFO, Brian Oslavsky, says investing in 800 million dollars into amplifying the One Day Delivery structure is to increase convenience for consumers and “open a lot of potential purchases.”

You got to spend big to win big!

To dominate in the eCommerce world, Amazon.com offers two exclusive visa credit cards. Both have great ratings amongst credit card selections. The two are Amazon Rewards Card and the Amazon Prime Rewards Visa Signature Card. Both have no annual fees.

Value Penguin breaks down the differences between the two: 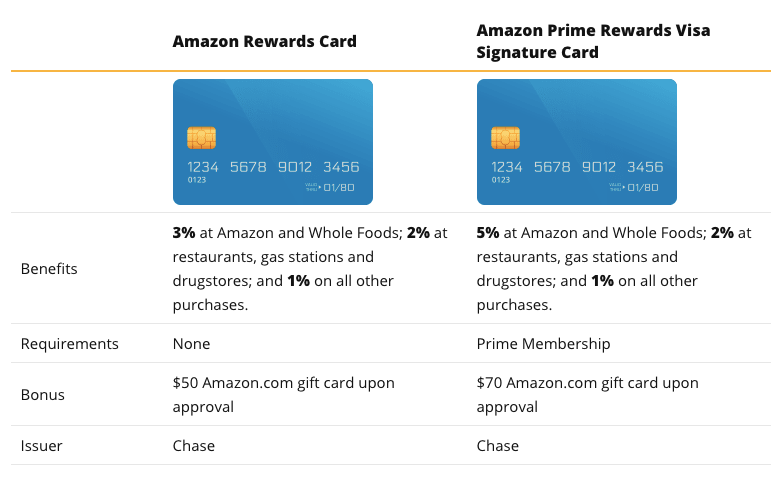 It’s quite a good deal as you enjoy these perks, not just on Amazon!
Amazon gets to encourage more spending on their products and also for their company Whole Foods, which is a win-win situation for them.

Taking On the Groceries Game

In 2017, Amazon acquired Whole Foods Market. One of their ambitions was to bring groceries into the digital age. Grocery stores have so far been limited to physical brick-and-mortar locations. They wanted to transform this traditional retail model: the reason behind this is because CEO Jeff Bezos had stated that Amazon would be interested in running physical storefronts if they had unique ideas.

Media outlets such as the LA Times think that the company hasn’t really revolutionized anything. One achievement was the debut of their cashier-less convenience stores, Amazon Go. The project is experimental and is testing the scalability of cashier-less technology and still ongoing.

It’s quite a good deal as you enjoy these perks, not just on Amazon!
Amazon gets to encourage more spending on their products and also for their company Whole Foods, which is a win-win situation for them.

There are over 2.5 million active sellers on Amazon’s marketplace. Each year, hundreds of thousands of new sellers join Amazon because of the sheer volume of users and purchases.

According to Episerver, 23% of online shoppers go to Amazon for product inspiration. That’s like digital window shopping, and because of these online, habitual consumer behaviors make the Amazon marketplace unbeatable!

There is pushback that the Amazon marketplace is damaging the retail industry. However, on the other side of the coin, it has empowered small and medium-sized businesses to have a new channel of revenue and allows a wider audience range.

Aside from listing one’s products on the marketplace, to stand out from the crowd, Amazon Ads might be appealing to sellers.

Also, other brands that might not sell on Amazon can also utilize their huge network to serve advertisements. It was recently announced that Twitch, a popular live streaming site that Amazon owns, will now have programmatic ad space available.

This means audiences who tune in to watch their favorite streamers live will now be shown video ads tailored to their interests. For example, Mukbang has been huge on Twitch. Mukbang is when a person live streams them eating large amounts of food while interacting with their audience. Perhaps the people who tune in are lovers of food; then, they might be shown food and beverage ads!

With millions of orders processed on a weekly basis, Amazon collects millions of users’ information, shopping preferences, etc. These insights can help predict consumer behavior, which is invaluable to marketers.

Because Amazon has so much user activity on its platform, and it gathers so much information, they even offer an SEO software called “Alexa.” The tool allows marketers to research consumer data, analyze competitor websites, SEO, check for backlinks, and even analyze your target audience!

Alexa.com’s keyword tool is very accurate compared to other similar sites. The reason why Amazon has such in-depth data on what keywords companies are paying for is that they make a whole lot of consumer sales, which gives them access to search keywords. In contrast, its advertising giant peers, Google, and Facebook do not.

We hope these stats and facts give you some more insight into how Amazon is totally rocking the eCommerce world!

What Have We Learned?

What are Dynamic Search Ads Helpful For?

In this blog, we're going to discuss what Dynamic Search Ads are, how they work, what they're good for, and share some best practices. By the end, you'll be able to determine if it's a viable channel for your digital ad strategy! What are Dynamic Search Ads? Search...

Father’s Day is coming soon!Did you know that since 2009, the average spend on Father’s Day presents has increased from $90 to $148? More people are looking to gift their fathers a unique gift or something that can create a special memory. According to the National...

How to Choose the Right Advertising Channel

So, you’re running a marketing campaign, but not sure what advertising channel to choose? Advertising means bringing attention to a brand’s product or service and implementing specific tactics to achieve campaign objectives, such as increasing brand awareness or...