We’re sharing our favorite Mother’s Day ads of all time!

With the special day coming up soon, we’re gearing up and planning for gifts and ways we can celebrate mom!

According to the National Retail Federation (NRF), consumers spend an average of $205 on Mother’s Day gifts and celebrations. The top three gift categories are:

Aside from gift-giving, as marketers, we also wanted to share our selection of great examples of Mother’s Day ads. We hope it inspires you and gets those creative juices flowing for what your brand can do for Mother’s Day!

Editor’s Note: This blog will serve as a living document, and we will continue to update it each year with Mother’s Day ads we adore!

Photo by Alisa Anton on Unsplash

“Hey, Google” has been one of the most common phrases since voice command was a thing. But what phrase has been around…forever? Yep, “Hey Mom”.

Google aligns itself with the family’s matriarchs, responding to all sorts of inquiries and questions, big or small. Google is always there for you, and so is Mom. At the end of the ad, they insert their featured product, the Google Nest Hub, which can be used with voice command and act as a digital photo frame to celebrate mom. 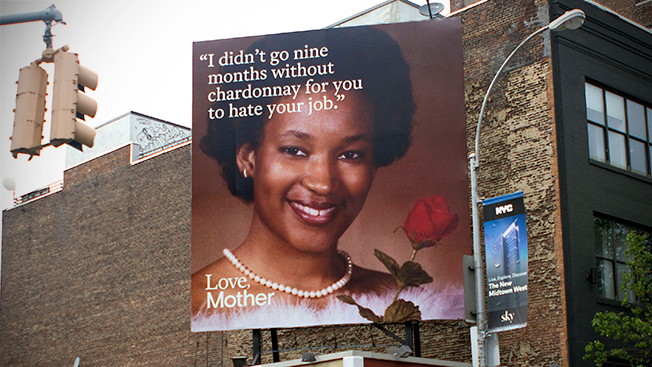 Mother New York is a creative company, and they were pretty smart in taking advantage of Mother’s Day to spread brand awareness!

If you go to their website, you’ll see the leadership team’s mothers’ photos and if you hover your mouse over it, it showcases the actual team member’s face. Their mothers’ pictures are also featured on one side of their business cards and decked out in the office lobby. As you can see, it’s a big part of their company culture and identity to show love and appreciation for moms.

Their ad featured photos of mothers when they were younger, alongside a cheeky mom truth bomb. Another ad says, “Be the kind of person your dating profile promises”.

The primary purpose of the campaign was to let mothers know they are heard and appreciated. On the other hand, we believe it’s also an effective advertisement for hiring talent. With a first look at the sign; people might not know what company the ad is for, but when they look up “Mother New York”, take a look at their website, it all clicks, and you’ll be like, “A-ha! That was a clever ad!”, hence, that’s a cool creative company.

We think it’s an authentic ad and their brand identify genuinely shines through.

Publix, the supermarket chain kept it simple but heartfelt for this Mother’s Day ad. The commercial focuses on a pregnant mother prepping a meal with her young daughter. It’s an everyday moment many families can relate to. The camera pans in and out, showing many of the fresh produce Publix carries, as well as the interactions between mother and daughter. It’s a sweet video that establishes Publix as a family-friendly, nurturing brand.

(Did you choke up a little at the end too? We know we did!)

Is it a “best ads” blog if we don’t feature another one with Ryan Reynolds (don’t forget about his Deadpool V-Day ad)?

As a co-owner of Mint Mobile, Canadian actor Ryan Reynolds features his mom to narrate this Mother’s Day ad. We like the self-deprecation element, but it’s also a way for Ryan to celebrate his mother through the montage of childhood photos with her. The ad has a believable dynamic between mothers and adult children and has a friendly message for everyone out there not to forget to call home and connect with mom now and then.

This 15-second video advertisement has it all. The narration effectively encapsulates “mom” reminding a son that getting a thoughtful gift for her ain’t that hard. The visual presentation of the types of jewelry was presented front and center nicely, alongside affordable prices. Then cue heavy music and enter goth yearbook photo, then oop– back to Peoples Jewellers’s branded purple. To sum it up, it was engaging and funny!

“You Never Call Anymore” grabs your attention almost immediately. The positioning of the text draws your eyes down to the Call-To-Action button, “Shop Now.” Moreover, the soft coral color really pops and represents the look and feel of Mother’s Day.

Microsoft Teams‘ ad debuted in May 2020 at the beginning of the COVID-19 pandemic lockdown, where people worked from home. It’s a successful ad because firstly, It was highly relevant to the climate, secondly, it highlights the online video meeting product, and lastly, shows just how much it takes to be a working mom to transition to working from home.

We think it’s relatable, on-trend, and sends out a good message to show our appreciation for working mothers everywhere.

This P&G commercial was released in the Philippines in 2020 during the first wave of Coronavirus. It’s an emotional glimpse into what goes on for our heroes in the frontline. We like that the ad serves two purposes: thanking frontline workers for their sacrifice and celebrating working mothers.

The objective of this Virgin Mobile Mother’s Day ad was to encourage adult children to sign new contracts for separate plans and ditch their family mobile plan.

It felt like a TV short with sponsored content instead of a straight-up advertisement. Even if you haven’t seen Curb Your Enthusiasm, Susie Essman’s dynamic character was still pretty effective for driving engagement (and sales), eh?

Okay, who else is a sucker for rhymes? We unapologetically raise our hands!

We like that the graphic showcased that they offer their product offerings, especially the sunglasses as it’s not the first thing you think of about the Toms brand.

Notice it doesn’t even have a discount code of promotion? This email campaign by Toms is seasonal and is simply there to remind the reader that their products can make for a great gift option for mothers and ultimately, drive website traffic.

The imagery of pregnant women working out isn’t prominent enough. We like that Nike featured a diverse group of focused, strong mothers-to-be in an inspiring, visually stunning video campaign. The messaging of “Just Do It” is straightforward and it subsequently was a great way to show that their athletic wear is for all bodies. Eliciting emotion and selling products, a winning formula!

Whoa, two of P&G’s video Mother’s Day ads have made it to our list!

P&G leans in on current events and delivers beautiful cinematics to tell a story through their ads. This commercial was created for the Sochi Olympics in 2014. The reveal at the end and how proud the mothers of their children’s achievements really tugged at our heartstrings!

The primary message was to thank mothers for teaching us falling only makes us stronger and giving us the encouragement to try again. At the end of the ad, P&G slips in a montage of their brands such as Duracell, Bounty, Pampers, etc, solidifying that they are proud sponsors of mothers. First, they captivated their audience, then elicited some emotions, and lastly, promoted their brand. Well done, P&G!

We hope you enjoyed our list of Mother’s Day ads because we had a lot of fun compiling this list. Stay tuned for our Father’s Day blog in a month or so!

We wish all the mothers out there a very happy Mother’s Day!
Thank you for all you do, we love you!

Digital moves fast, and it’s easy to get left behind - luckily, we’ve got you covered. Subscribe to gain weekly insights into the world of digital advertising!

Our weekly newsletter has the latest news, blogs, resources and more. Join us and stay in the loop!

How to Choose the Right Advertising Channel

So, you’re running a marketing campaign, but not sure what advertising channel to choose? Advertising means bringing attention to a brand’s product or service and implementing specific tactics to achieve campaign objectives, such as increasing brand awareness or...