In the Matrix, it was possible to program different technical skills such that the protagonist, Neo, was able to learn Kung Fu in a matter of seconds. 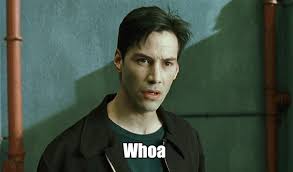 Programmatic ad buying brings that type of ‘instant mastery’ to advertisers. It’s great because it allows us to get the clearest picture of our campaigns, and effectively do more for less. More impact; lower costs.

We’re going to look at exactly how to do more with less, but first let’s quickly (re)acquaint ourselves with a semi-official definition of programmatic advertising.

Programmatic advertising is automatically triggered by any type of event and deployed according to a set of rules applied by software and algorithms.

So, programmatic is like regular advertising with some programming logic mixed in. If condition A is met, then event B fires — you know, the kind of stuff the internet is built on. Not taking advantage of programmatic advertising is like passing on the core functionality of the internet, which you probably don’t want to do. You want to do more with less

…But to a certain extent these are just words. Let’s get granular and I’ll give you a picture of just how much more, with exactly how much less.

1. BE Organized: Use Tabs to Segment users (in Real-Time)

Chances are you actually know about tags. You may have maybe heard them referred to as ‘pixel tracking,’ or maybe some other term with ‘pixel’ in it. This harkens back to a previous era in online advertising (where the functionality I’m about to describe was often accomplished with a single pixel image file) but basically the operative point to know is that tags are just pieces of code that do something. Maybe it’s dropping cookies, maybe it’s harvesting analytics data, but whatever the case, something is occurring.

This is the start of the programming logic that I mentioned above. By instilling certain ‘triggers’ into your page, you are able to sequester user data into neat little groups like, “high value” or “takes forever in the conversion funnel” — whatever you want.

If this sounds complicated and code-heavy, don’t be worried as tools like the Google Tag Manager make implementing these kinds of campaigns pretty easy. If you know how to drop the analytics tracking code, then you can get started with tag management.

You don’t have the hack the Matrix for this one.

Photo by Markus Spiske on Unsplash

2. Be Everywhere: Track Visibility on Mobile and Beyond

Through programmatic buying, you increase your efficiency in targeting the customer. So to a certain extent at least, you might think that the time and energy it takes to track your campaign might not be as much of a priority because you know that your advertisement reached the intended audience, right?

Tags allow you track different segments of your users, but that is different from the type of tracking that allows you to see the effects your highly specialized creative had on those segments. For example, let’s say you successfully used tags to segment your users into a niche grouping. OK great. Then you decide to serve up an advertisement that is so in-touch with their interests that you think, “This can’t possible fail.”

Then it does — a total flop.

That’s when most realize that it doesn’t matter if you have the best advertisement in the world, if people are not seeing it, then the efforts are for naught. Google research demonstrates 56.1% of all served ad impressions are not seen.

So this is where the notion of visibility comes into our discussion, and also the meta discussion. Google is leading the charge with their Active View system, which offers the opportunity for advertisers to buy ads that only incur a cost if the ad was actually “viewed.” What is specifically meant by “viewed” is explained here:

Based on Active View, advertisers can buy reservable inventory on the Google Display Network (GDN), paying only for impressions that meet the Interactive Advertising Bureau’s proposed viewability standard – at least 50% on screen for one second or longer.

The Media Rating Council accredited Google’s Active View metric in 2013, effectively ensuring that viewability-based purchasing had a future. As of 2015, the results look more than promising, with companies (albeit Google itself in this case) seeing fairly large lifts over the same campaigns that do not use Active View.

Google has succeeded in providing a common measurement metric the advertising world can use to transact on viewable impressions, and with that paradigm now established, it’s green pastures ahead.

Welcome to the Desert of the Real

The umbrella of programmatic ads is quite a large canopy, and in this post we only really looked at tags and viewability. In future blogs we’ll cover additional programmatic topics like real-time bidding and the subtle art of display ads.

Fascinated by this stuff? Check out War Room to see the professionals putting the information above to work.